Questioning is the basis of all learning.

Perception is an individual construction of reality, which are not snapshots of reality that can be called up to discover facts that have not been constructed and stored in our memories.

For example: if people are asked to draw a picture of a penny, you can get a variety of results, as below. Memory is a construction created by our personal experiences, biases, emotions, context, and environment.

Perceptions originate from our senses and how they are connected and stuctured in our brain.

For example, words aren't just used to describe our perceptions they are processed differently in different parts of our brain. Samples:

Which penny is an accurate representation?

Memory is an inaccurate representation, not reality. If 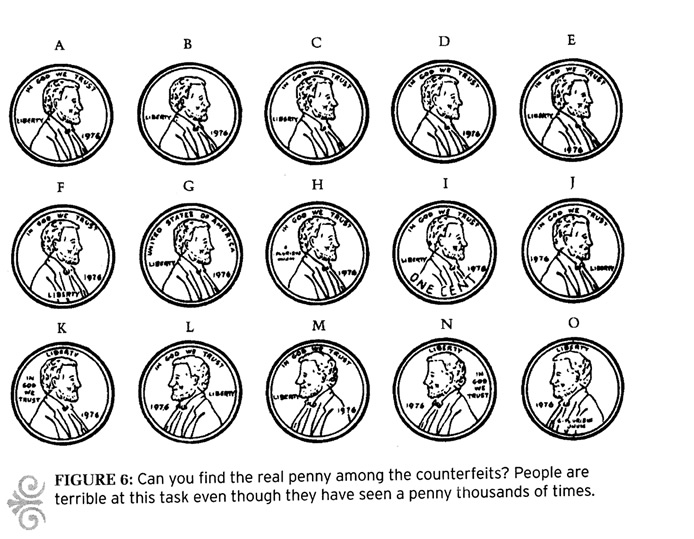 it isn't universal, can it be reality? See also Arguments, reasoning, logic, and proof.

Memories, such as eye witness accounts, used to be the gold standard of court testimony are becoming more and more questionable.

Memories are malleable and can be changed.

Illusion is an experience where our perceptions are different than reality.

Which of the red lines is longer?

Which table is longer?

Table illusion - See an animation? of one of the table tops being moved on top of the other tale top.

Stare at the dots and see them move ...

People on a sidewalk illusion

Which person is smaller? Larger? Medium?

Up or Down illusion

Is it up or down?

What is the average length of the lines?

Which eyes are scarier?

Snake slither - humans respond with a fight, flight, or freeze reaction to a snake in .005 seconds. They recognize it later, after the fact, at .05 maybe.

The brain fills in missing information

What do you recognize in the black and white image below?

An unconscious mind fills in the gaps.

See how your brain fills in the gaps when reading these two pieces:

How many black dots?