The suggestions below include many more ideas to reflect on than is necessary to include in one reflection. Review the list and select ones that interest you for a particular read aloud or other activity. As you select them, check that you have included a description of the activity, what opportunities were available for learning, what was learned, evidence to support your inferences for learning, and the attitudes of the learners related to their experience.

Suggestions for reflections on literacy and literature

What is the piece of literature or activity:

Facilitating Literature ideas for the activity:

Describe what students discovered from reading, viewing, and or listening to the story.

Describe how students represented their understanding.

After reading the picture book The Last Basselope: One Ferocious Story (1992) by Berkeley Breathed , I knew it would be one great book for others to read or to listen to as a read aloud.

However, the teacher part of my brain wanted to know what the listeners or readers would get out of it. What they would take away from the experience and hopefully desire to respond to so that I might be able to facilitate a deeper understanding.

I thought of imagination, creativity, visualization, dialogue, story telling, and story elements. I rattled through the story elements, plot, characterization, setting, tone, style, theme, and point of view. Any or all could be a possibility.

I didn't think much more about it, until I selected the story to read aloud in a classroom. As I did I thought I would need something to grab the students' attention and focus it on the story for them to really get into it.

I took a poster and drew the characters. I decided to place one character in a less obvious position and included both names for one character. I put each name on its own small piece of poster board.

Before reading I planned to ask the learners to guess the names of the characters.

After they discussed each, I would clip each above the character that was agreed upon or close to characters they thought it might be.

The picture below shows the poster, the labels with the names of the characters, the title of the book, and author's name. 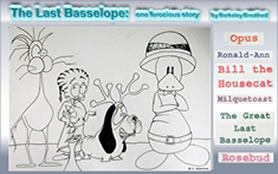 I read the book and only stopped if there was a person who looked as if they wanted to share something with the class.

Some groups wanted to stop after each charter's name was identified and discuss, so I would.

Then before starting again, we would briefly review where we were in the story before reading again.

I did as planned and the suggestions the students had were interesting and helped them become familiar with the character names and encouraged them to listen and find which character was which. For some it might have focused them more on that, than on the story, but later I realized the story could be read more than once for different reasons.

One interesting thing that happened, after reading, was the discussion about the characters. Learners did want to talk about each character and the role they had in the story.

Another interesting idea that emerged was, who was the main character?

Most thought it was Opus and some thought Rosebud, the last basselope. The conversation continued with ideas from the book that supported which characteristics each thought a main character should have.

Support for Opus included: he organized the search, located Rosebud, made friends with Rosebud, helped with the escape, and was with Rosebud at the end.

Support for Rosebud included: being in the story from the beginning to the end, the title of the book referred to Rosebud, he made a friend, and he was in the book at end.

Either way the discussion was good and the learners were eager for me or their teacher to tell them who was the main character. I wouldn't or couldn't and neither would their teacher suggest one more than the other. We believed that what each learner thought was important to them should be the deciding factor. We felt it was most important for us not to devalue their thinking as it might lessen their transaction and response to the story and reading in general.

Overall the learners enjoyed the book and requested I leave it so they could reread it. They reviewed their ideas on characterization and what a main character might be. They used references from the book and ideas of story elements to support their claims. They also saw other learners and adults, along with them, have an enjoyable transaction with a quality picture book and enjoy sharing their responses to it. It was a planned activity, however, it was planned to empower learners to enjoy and think critically about a story. I believe it achieved that.

Before you read the story, guess which character's illustration matches to their name in the book. 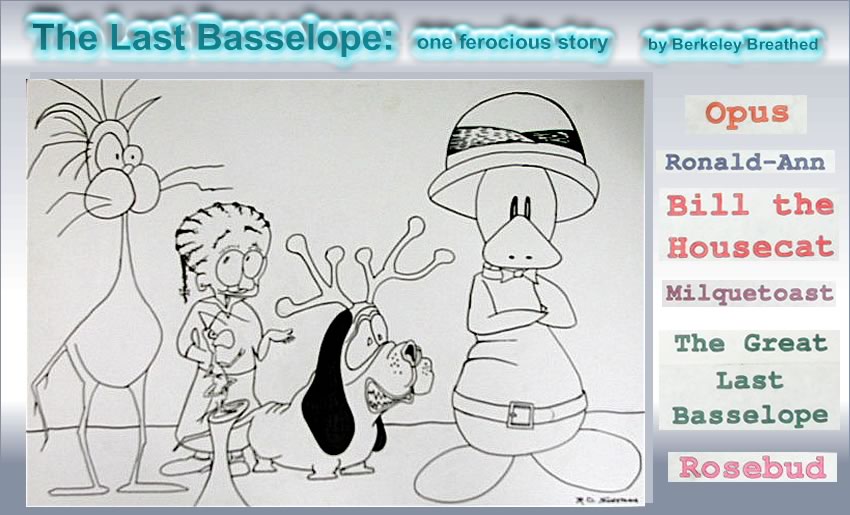 Read aloud for The Last Basselope. by Berkeley Breathed